A shtronger /s/ for America


"We are always stronger together!" (First Lady in Manchester) - a slogan we have heard from the First Lady repeatedly in the last few weeks of this presidential campaign, most recently in New Hampshire. She enunciates the entire speech carefully in proper Standard American English, with the publicly desired lack of regional features. Only she does not produce an /s/-sound in the word stronger resembling the one in song. If you listen closely, you’ll detect a sound much closer to the first sound in the pronoun she.

Linguists describe this phenomenon as retraction, whereby our tongue, the active part in articulatory movements, slides from the regular /s/ position right behind the front teeth to a more retracted position further back, where the palate curves up. This difference in tongue position creates the sound we hear in she.

Tongue Positions for s and sh

Relatively few words provide the environment for this articulation pattern to happen. However, it is highly interesting from a linguistic point of view and especially from a speaker such as Michelle Obama. If you listen closely to the speech, you will notice how carefully she forms her words and how mindful she is to keep her speech at a convincing pace with pauses wherever possible. So for those who think that the pronunciation shtronger is just a case of improper pronunciation or a lazy tongue: think again. Also consider any dialect relation there might be. Obama does not use a strong Chicago accent, nor does she use any of the stereotypical accent features of African American Vernacular English. That is what makes her frequent retraction of /s/ all the more notable.

You may also consider the amount of attention being paid to her manner of speaking at these public events. To say it briefly: nobody seems to have corrected her in the eight years of her husband’s presidency. This would indicate that this pattern (as we expect from previous research) is neither a speech impediment nor a clear-cut dialect feature, even if some online comments on earlier speeches show frustration with this particular pattern. 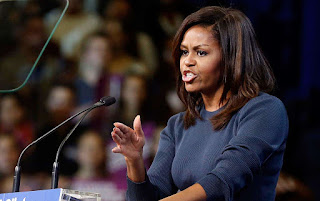 
However, a variable that cannot simply be explained by dialect differences or improper speech must be rooted elsewhere. So what else does it do?

This question is not easily answered. Interestingly, Hillary Clinton does not present with this pronunciation pattern. At the Democratic National Convention she says a conversation started 45 years ago is "still going strong" (Hillary Clinton DNC) while her husband remembers her "sense of strength“ (Bill Clinton DNC), both with the sound /s/. Even Barack Obama says that the country is "stronger"(Barack Obama DNC) at that same event. So why do none of the speakers in similar public positions use this pattern, when Michelle employs it categorically? And would it be just as acceptable to hear Hillary talk about shtrength?

Women are known to lead change in language whenever a certain feature becomes more prominent in a speech community. Thus it may not be surprising that Barack does not employ the retracted sound.

So why is it then, that Hillary does not do it? Though it may seem obvious, it is not as easy as blaming it on the apparent ethnic differences. Research in Philadelphia has found retraction among white speakers of all ages (Gylfadottir 2015).

Another possible difference between the former and the current First Lady is their age. Yet, with only a little over a decade between them, that may only have a slight influence on the prominence of a pronunciation pattern.

When we look at education as a factor, both were highly educated at elite universities and most likely were introduced to the same linguistic repertoire there. Socially, they differ mainly in their upbringing. Though both were born in Chicago, Michelle certainly came across different linguistic patterns on the South Side than Hillary did in the suburbs.

Wherever the retraction pattern is rooted, the more interesting question to ask is what it signifies to listeners. How do we perceive someone who uses this pattern?

Arguably, it may sound more relaxed than the fronted /s/ as it resembles the sound used in spoken language when assimilating words (for example the sound created when did you can be conjoined to didju). A more relaxed form may be surprising in such a controlled linguistic environment as a speech. Yet, recent meta-commentary on /s/-retraction provided by participants in a study indicates that few people pick up on the pattern and its perception ranges from neutral to even positive. If there are no repercussions in employing this speech pattern and if it may even sound pleasant to some of the voters, the First Lady certainly has no reason to avoid it.

Furthermore, it may also be perceived as "younger," one difference that may also account for Hillary’s lack of the pattern. The little research that exists on the phenomenon indicates that it is on the rise amongst younger generations (Gylfadottir 2015, Rutter 2011). Without assuming any form of conscious choice, below the level of consciousness one could see why a public person involved in sports programs for teens and empowerment campaigns for young females may incorporate a "younger“ pronunciation pattern in her speech.

Overall, without an interview from the First Lady, we can only make assumptions about how and why she articulates her /str/-clusters in a retracted manner. However, to see a phonetic variable in American English speech at play in a largely controlled speech environment from a carefully enunciated and well-prepared speaker cannot but peak the curiosity of a linguist in a world where public opinion is that most social markedness of speech is disappearing and we are all sounding more and more alike. Maybe we cannot only watch this country on its way of getting "stronger together" but also watch this pattern getting stronger.


More resources on the phenomenon

Gyfadottir, D. (2015) Shtreets of Philadelphia: An Acoustic Study of /str/-retraction in a Naturalistic Speech Corpus. University of Pennsylvania Working Papers in Linguistics 21.2.

Rutter, B. (2011). Acoustic analysis of a sound change in progress: The consonant cluster in /st/ in English. Journal of the International Phonetic Association 41, 27-40.University of Pennsylvania Working Papers in Linguistics 21.2.

SaveSave
Posted by Unknown at October 22, 2016 No comments: 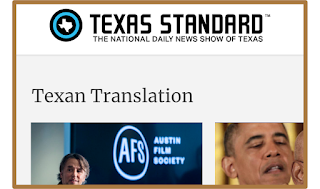